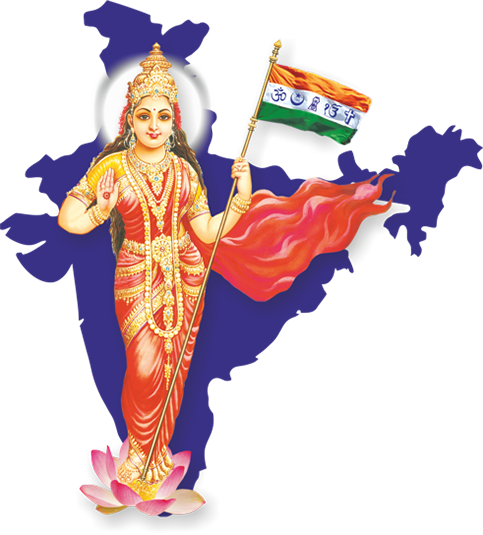 The ‘history’ of Bharat Mata

nvoking Bharat Mata in the much-independent India sounds odd, at least keeping in mind its history. The goddess has become a rallying point in proving ones nationalism and patriotism, two very common words in the common lexicon of India today. The question is – To say or not to say ‘Bharat Mata Ki Jai’.

India is a country with numerous gods and goddesses in its religious pantheon, especially in the mainstream Hindu religion. The religion became a part of the naming of the country at a point of time when identity of the nation got associated with its religion and thus the name Hindustan, the land of Hindus. Important to mention that the name was not coined during the Independence movement, but was coined by foreigners who identified the nation with the religion of the majority during their journey to our country.

The religion and certain aspects of the national religion got an impetus during the independence movement when mythological allusions were used to boost the movement. These apart, new deities were also ‘created’ for a reference point and lend credence to the movement. One of the deities which got a focus was Bharat Mata.

Prithvi was a Vedic deity which was worshipped from time immemorial and was associated with earth. Worship of earth was an age old concept well ingrained in the Indian psyche. Soon ‘earth’ was associated with ‘land’ and during the independence movement; ‘land’ became synonymous with ‘motherland’. The concept of motherland was becoming a central focus in nationalistic literature of the times. Around the late 19th century the idea of Bharat Mata was formed in a play by the same name in a play by Kiran Chandra Bandhopadhyay in 1873. In 1882, Bankim Chandra Chatterjee’s novel Anandmath introduced a hymn ‘vande mataram’, which became the clarion call for the Independence movement. In 1905, Abanindranath Tagore, the nephew of Rabindranath Tagore drew the first painting of Bharat Mata. The painting was actually drawn as Banga Mata, a personification of an undivided Bengal which was fragmented by the British. However, this Banga Mata soon became the precursor to many more representations of Bharat Mata.

Abanindranath Tagore’s Bharat Mata was however, quite different from the image that people had in their minds. His Bharat Mata was a beautiful young woman who was in orange coloured saree, and looked like a sadhvi, standing at the edge of a lotus pond. She was shown with a halo behind her head, and had four hands, giving her a divine look. In each of her hands she was holding a sacred manuscript, an akshamala, or a rosary of beads, a vastra or a piece of fabric and a bunch of rice foliage. She had a calm demeanor and was an embodiment of grace. She was a combination of both Saraswati and Lakshmi, deities who were highly revered, the former for knowledge and the latter for prosperity. Collectively, the deity seemed to imply that the motherland had gifts of shiksha, diksha, anna and vastra, i.e. knowledge, spiritualism, food and clothing.

Earlier too such goddesses were used to give boost to such movements. Shivaji was shown being blessed by Ma Bhavani (a variation of the fiery form of Mother Goddess), implying that his actions had the blessings of the goddess in his fight against the Mughals. The ideas of motherland and Bharat Mata were well accepted by Indians and soon numerous representations were made to stir the patriotic mindset of the people. Bharat Mata started being represented in more martial form, sometimes resembling Durga, with a trident and the national flag, while sometimes she was shown blessing Mahatma Gandhi and other nationalist leaders. Sometimes to rouse passions, she was even shown chained and with a sad face and a few white-skinned asuras attacking her or with whips in their hands, implying the exploitation of her wealth by the British. All this went on to give a huge impetus to the freedom movement and soon temples were opened giving the deity a sense of permanency.

In 1937, at the peak of the Independence Movement, a temple dedicated to Bharat Mata was inaugurated by Gandhiji in Benaras. Soon many such temples were being built across the country. A shloka was also uttered during the worship of the goddess, which was –

The above meant – “I pay my obeisance to mother Bharat, whose feet are being a washed by the ocean, who wears the mighty Himalaya as her crown, and who is exuberantly adorned with the gems of traditions set by Brahmarishis and Rajarishis.”

This personification was done for a purpose way back in the late 19th century especially for a then largely illiterate milieu, but well-aware of its mythology. Such allusions and many more served their purpose as the British were unaware of the context, but the people got the messages well. A peep into history will show many more examples of such usages with great success too. However, invoking it today in the 21st century to prove ones nationalism is probably questioning its basic rationale. Inducting deities in the pantheon for a purpose then was understandable, but invoking them in the name of a ‘cause’, is downright political and divisive, contradicting the original cause of creation.

The article was first published on –